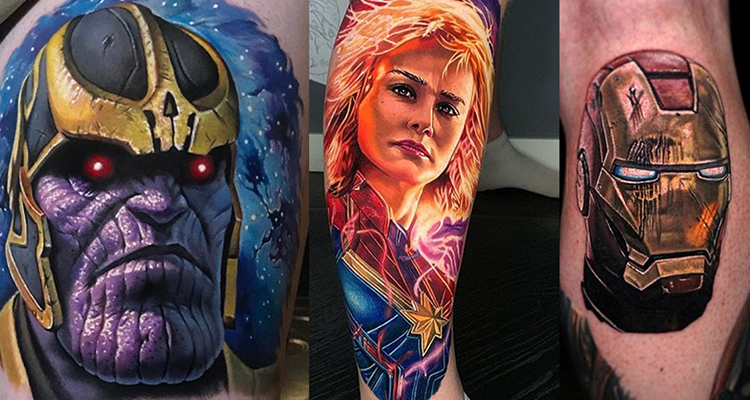 We all remember the devastating events of Avengers: Infinity War (2018), after that, the universe is in ruins once again. The remaining Avengers — Thor, Black Widow, Captain America and Bruce Banner assemble once more in order to undo Thanos – (the evil demigod who decimated the planet and the universe), actions and restore order to the universe.

Marvel recently released a new trailer for the highly anticipated Avengers: Endgame, besides featuring Iron Man and Captain America’s reunion, a Pepper Potts sighting, and Thanos’ first official Endgame appearance, the most talked-about part of the trailer was Hawkeye’s new ink on his arm.

Avengers Endgame with its Tattoo

On April 26th, 2019 the fourth film in the Avengers series and the 22nd film of the Marvel Cinematic Universe, Avengers: Endgame, premieres in theaters. For this highly anticipated final installment, many of our favorite characters are returning with the bang to the big screen, which includes Iron Man, Captain America, and Captain Marvel. But, but, this time besides actions on big screen they have something mesmerizing to flaunt. 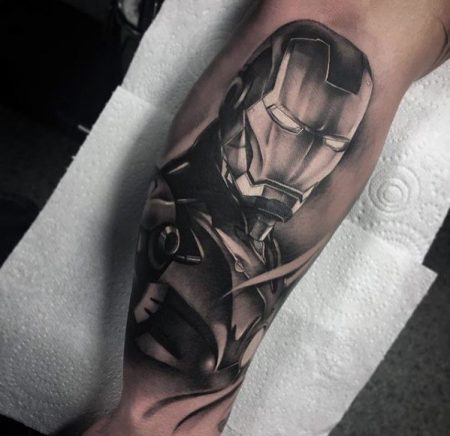 Wanna know what that is…..?

Yes, these avengers are returning with inspiring tattoos from talented artists around the world, which you would also want to get when next time you go for getting inked!

Hawkeye, he was completely absent from Avengers: Infinity War. This time not only Hawkeye, but his tattoos in Avengers: Endgame is going to leave a mark on your hearts. Marvel Studios is wasting no time showing him and his new look in the marketing for its follow up.

Having already appeared in his “cool” new haircut in the previous trailer, Hawkeye rocked a sleeveless shirt in a recent clip, publicizing an elaborate tattoo of a skeletal samurai covering his entire left arm. The tattoo is most likely signaling to the character’s one-time comic’s identity of Ronin, a name he borrowed from the master less samurai from Japan’s primitive period. Apparently, Clint Barton’s family got wiped out upon Thanos snap at the end of Infinity War, and getting this intricate tattoo is the hero’s way of grieving. 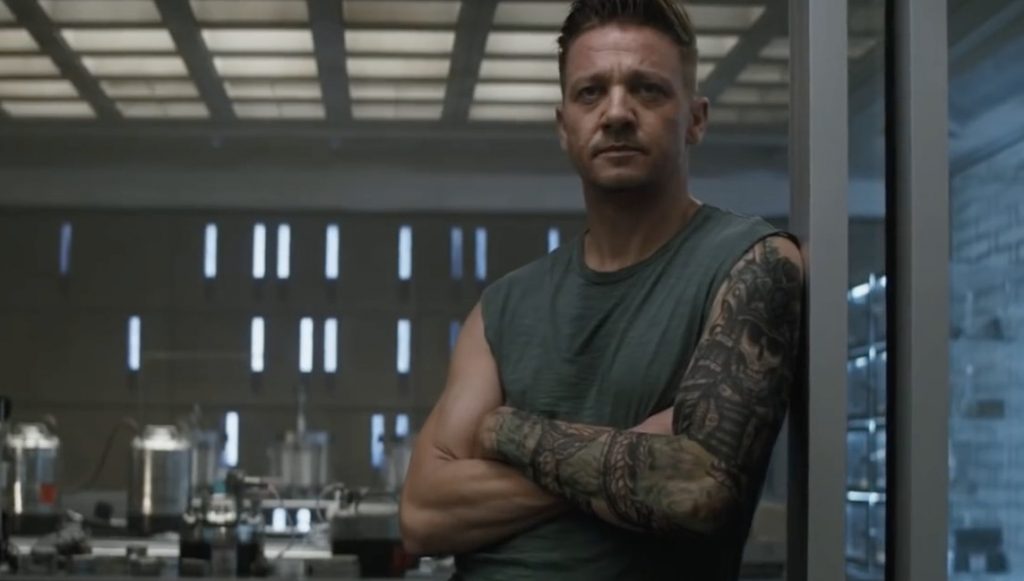 The most exciting aspects of Barton’s role in Avengers: Endgame for fans is that he’ll take on the Ronin persona and leave his bow and arrows behind momentarily, just as he did in the comics. This transformation only happens on the page after a tragedy and has led many to assume that the rest of the Barton family disappeared during the snap. Besides, just wearing a new black and gold costume, there’s a few other changes to Barton’s look that may give you some intriguing clues about the plot.

In the recent Screen Rant video, Barton’s new look in Avengers: Endgame was captured, especially his tattoos. Very recently it was shown that his left arm is completely covered with an intricate tattoo design. It seems, the samurai lifestyle he’s chosen for tease or maybe a new way of hero to grieve his family. Whatever be the reason, Hawkeye’s mesmerizing transformation in Avenger Endgame is all what is going to add to the movie all in all.

However, Barton is going to put on the Ronin costume in Avengers: Endgame and has a tattoo to epitomize this transformation, still it appears that he won’t stick with this look for long; as most of the scenes he’s been featured in the trailers, they all show him in a new Hawkeye costume and back with his trust bow and arrows. So, may be Avengers: Endgame may only give fans a few minutes of the Ronin look, only upon watching we will know…. ☺ ☺

Well, whatever costume he will be wearing, it looks that Barton won’t become truly involved in Avengers: Endgame’s plot until some time has passed. Most certainly, this will give him time to get the tattoos and figure out a new look to fight the Yakuza in Japan with. And, once he rejoins the rest of the heroes and start the fight against Thanos, we can’t wait to see his transformed new look and how he puts his skills to use next.

Undoubtedly, Clint has gone through a lot in the time between Avengers – Infinity War and Avengers Endgame, but just I ponder how much time has passed? Would we be able to figure out a timeframe for Endgame with this tattoo? 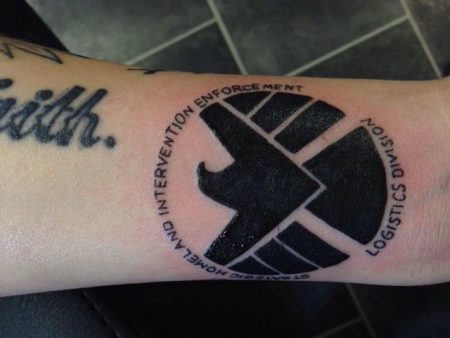 Though, we can’t say anything on whether Clint got the tattoo after the events of Infinity War, as he did not have the tattoo in his last appearance, 2016’s Captain America: Civil War. After he was taken into custody at the end of Civil War, Hawkeye disconnects with the feds, as Black Widow appears in a throwaway line of dialogue in Infinity War. Clint is a family man with kids, just like an Ant-Man, who cut a similar kind of deal as seen in Ant-Man and the Wasp. Scott Lang’s deal put him on probation, conditioned house arrest for two years. Maybe Clint received a lighter sentence, just because of his past exemplary service with S.H.I.E.L.D., but nothing can be said at the moment. 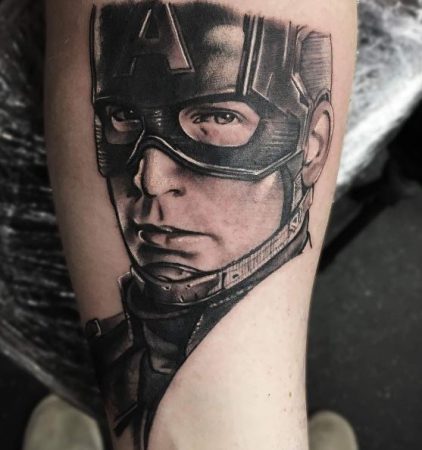 Clint had to persuade retirement from Civil War because he wanted a quiet farm life with his wife and kids. He wouldn’t need to be conditioned to house arrest just to stay with his family, which makes it highly unlikely that he got this Samurai tattoo while living a peaceful life in a familys.

But, what if that family was suddenly turned into ash? That can be the possible reason for Clint to get a big ol’ tattoo. Watching your wife and children die before you, especially when you are a “superhero,” yet powerless to save them, certainly seems worthy of a big tattoo.

Chris Morris, a Birmingham tattoo artist recently explained to SYFY WIRE that, “a tattoo like that could be done in one sitting if the client was hard as nails and the artist had the stamina to sit and do it. So far healing is concerned, the larger the area the more time it would take to heal, tattoo like that would normally take anywhere between two to four weeks, perhaps longer in some cases.”

Even if Hawkeye showed courage to get the tattoo on the entire sleeve all in one session, it wouldn’t have looked as good as it did in the trailer the other day.

Assuming that Clint found one of the tattoo artists who wasn’t killed during the Thanos Snap and he got the tattoo done in one session immediately after the dust had settled, we still assume Hawkeye would have taken minimum of a week to get that big piece. 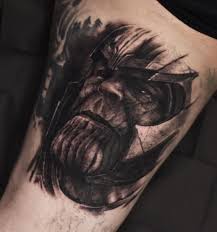 Well, from the trailers, it is not possible to make out how much time passed in between Infinity War and Endgame, though it is highly likely that there’s some sort of time jump within the movie itself. In some clips Black Widow has still appeared in blonde hair, whereas in other shots her hair appeared much longer and red again. If we theorize, probably, the first part of the movie will feature the surviving heroes defeating Thanos, while the other half will follow them as they will go back in time, with Ant-Man’s help, to undo the Snap. In the second trailer, Hawkeye doesn’t seem to appear to be flying into space with the heroes in a scene that’s seemingly close to the events of Infinity War.

Hence, it is easy to extrapolate from the clips of recent trailers that Hawkeye will not partake this initial Avengers mission, notwithstanding, he is seen later in the new red and white suits in a scene from a later time period.

Most probably, Hawkeye is grieving his family and hence doesn’t seem to join in the first mission to space. Or, maybe, he doesn’t join to fight Thanos in order to save his tattoo from getting messed up…. ☺ ☺. Nothing can be said as of now…. But yes, we’ll surely find out on April 26 when Avengers: Endgame premieres theaters.