Tattoo Policies and Rules for Job

Home About Tattoos Tattoo Policies and Rules for Job 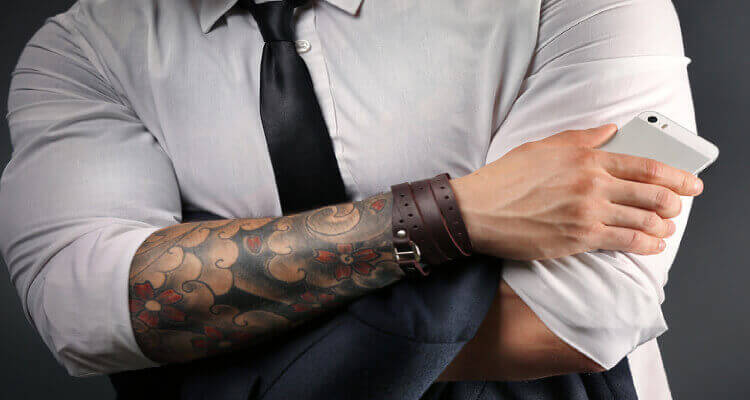 Tattoo Policies and Rules for Job

Getting tattooed is not only a cool thing to do, but also it is a great way to flaunt your personality. However, the tattoo rules for certain jobs are different, like the Army. Recently, the army has banned recruitment of people with body artwork. So the ones who are willing to join the army cannot go for the body artwork, they will have to adhere to the rules or else drop the dream of joining the army. The tattoo rules for job in army are:

There were different policies applicable in different places in recruitment processes. Now, a single set of rules and guidelines have been circulated for all. According to the new norms released by the department on the permissibility of tattoo in the body of the candidates recruitment in Defense forces:

The Army argues that having a tattoo increases the risk of contracting HIV and other infections among recruits. Besides, tattoos are strictly prohibited in many Government departments or jobs, which include, IAS, IPS, IFS, IRS, etc. However, people in government jobs like Bank’s Clerk and Probationary Officer, Engineering Services, PWD department etc. can have a tattoo etched on their body.

Apart from Army and Government departments, there are some corporate houses who have reservations of their own when it comes to have a body artwork. There are many corporate houses who discourage the recruitment of tattooed persons as they believe – people with tattoos are not serious with their work.

According to HR departments of Corporate Houses – A tattoo reduces your chance of getting hired. As visible tattoos specifically carry a negative connotation among employers. That is the reason most corporate houses avoid hiring people with tattoos. Also, they believe that a person with a tattoo may appear intimidating to the rest of the workforce. However, some corporations do not mind a small sized tattoo on the body.

Officially there are no rules or guidelines for barring a person from working just because he/she has a tattoo. Generally, professionals working in an organization should avoid having a tattoo, especially the large sized tattoos. As displaying a large tattoo in an interview or during the meeting leaves a very poor impression. They simply make the person less desirable as people with tattoos are considered to be less serious with their work. However, people working in industries like, creative agencies, media, fashion designing, music industry, etc. can have tattoos without any problem. Tattoos in such places are taken as an extension of their creativity.

If you really wish to have a tattoo, make sure you read the tattoo rules for a job in the first place, especially for joining the army. In case of a corporate job you can consider having a hidden tattoo, like you can have a tattoo on your back, ribs, or small-sized tattoo on your neck, fingers, ankle etc. A hidden tattoo is a great way to deal with your corporate job and you can flaunt it whenever you wish to!