Why Tattoo is Not Allowed in Indian Army

Home About Tattoos Why Tattoo is Not Allowed in Indian Army 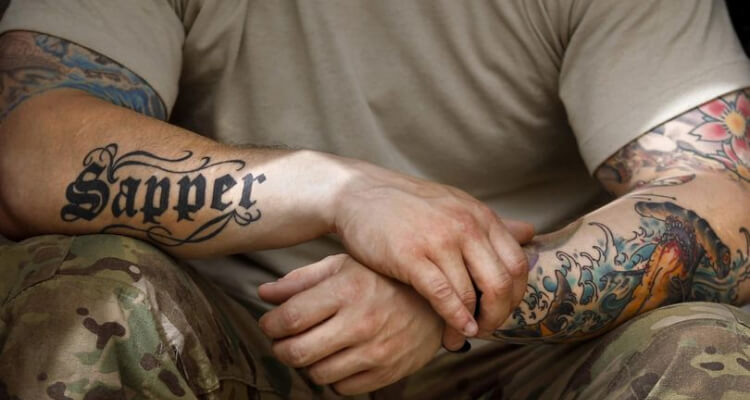 Why Tattoo is Not Allowed in Indian Army

In today’s society, tattoos have become increasingly acceptable. People all across the world accept the change, however, there is a rigorous tattoo regulation in the Indian Defense Forces. Personnel with tattoos on any part of their bodies other than the prescribed region of their arms are not eligible to join the Indian defense forces.

Only certain types of tattoos, including tribal tattoos, are allowed, as long as they follow local norms and traditions. There is little evidence that commanders have deemed these to have a negative influence on operational effectiveness, and as a result, individuals who violated the policy have been reluctantly discharged.

Tattoos are permitted in some government occupations, while they are prohibited in many others. In jobs like as the IAS, IPS, IRS, IFS, Indian Defence Services, Army, Navy, and Air Force, tattoos are prohibited. Some government occupations, such as clerk and probationary officer in banks, engineering services, and the PWD department, accept tattoos.

Candidates with permanent body tattoos are not permitted in the Indian Defence Forces because they are more likely to have dangerous skin disorders. HIV, Hepatitis B, Hepatitis A, tetanus, allergies, and other dangerous blood-borne diseases and infections can all be induced by tattoos.

There is a considerable risk of a dangerous infection being transferred into your body if untrained tattoo artists use unsanitary needles. Furthermore, HIV tests are exceedingly expensive, and the Army cannot afford to conduct them for every incidence of body tattoo.

What type of tattoos are not allowed in the military

Tattoos that are racist, disparaging, sexist, extreme, or immoral are prohibited by the US Army. These tattoos are not permitted, regardless of where they are placed on the body.

Candidates belonging to tribal communities/tribal areas, as defined by the Government of India’s Scheduled Castes and Scheduled Tribes Orders Act/Lists, are authorized to acquire permanent body tattoos on any part of the body, in accordance with the tribe’s existing customs and traditions.

This policy does not apply to such candidates. However, before beginning Stage I of the screening process, these candidates must present a certificate proving their tribal affiliation.

The Indian defense forces will not take any chances with its equipment or manpower. Doctor approval is required for tattoos on the rear of the palm and the inner section of the arm from the elbow to the wrist. Nothing other than a religious emblem or a name is tolerated as a tattoo.

Tattoos on other regions of the body, such as the legs or neck, are prohibited, and candidates having such tattoos are ineligible to join the defense forces. Candidates belonging to tribal communities/tribal areas, as defined by the Government of India’s Scheduled Castes and Scheduled Tribes Orders Act/Lists, are authorized to acquire permanent body tattoos on any part of the body, in accordance with the tribe’s existing customs and traditions.

Such candidates will be allowed to continue with the SSB selection process only if the required certificates are supplied by the candidate from a tribal region as specified in the call letter.

For a long time, body ink has been a source of contention among the military. A number of candidates were kicked out of multiple recruitment camps in 2011 because they had permanent tattoos.
Fortunately, you will avoid rejection if you have a tattoo on the other side of your palm or the inside side of your arm (from elbow to wrist) as described before. However, you must note that, regardless of whether the body area is permissible, the Selection Committee reserves the right to deny your entry due to your tattoo.

The rationale for enacting such a severe tattoo policy is sound. It is advised that candidates who are serious about joining the military avoid inking. Candidates with permanent body tattoos must provide a photograph of the tattoo, as well as information about its size and nature.