The first horror movie was a French film directed by Georges Méliès , named Le Manoir du Diable. This embarked the era of a totally new genre in the entertainment industry. Whether it is Frankenstein, Dracula, The Mummy, The Wolf Man, The Exorcist, Insidious, Conjuring, etc. And not to forget the shit-scary impact clowns have had on our minds, giving us Goosebumps through those nail-biting thrillers. 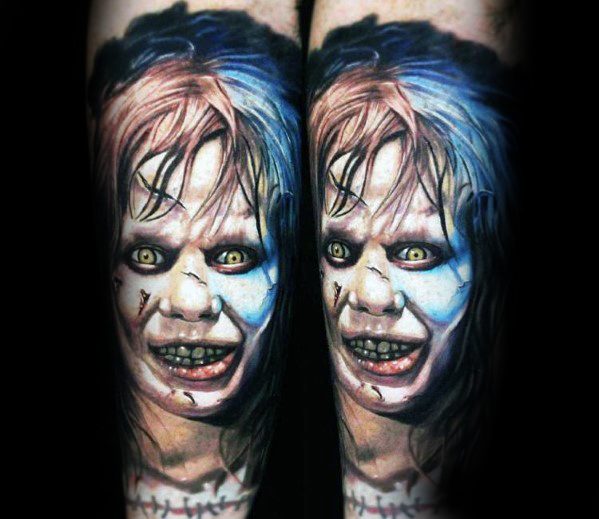 This genre has an appeal which attracts people to not only come and enjoy it but to engrave it on their body for life through a horror tattoo.

Horror movies refresh our worst fears by making us experience something unthinkable, and a horror tattoo depicting similar fearful scenes acts as a kind of symbol of those feelings who doesn’t let us sleep the whole night.

People also go for Horror tattoo drawings due to their super badass looks, and since we humans have an unknown affinity towards the dark side of everything, these horror tattoos make the wearer looks tough, dangerous, and certainly not the one to mess with.

Whether you are an extremist horror follower or just appreciative about art and appealing patterns, these awesome horror tattoos will unquestionably fascinate you.

Though there are innumerable horror films, but tattoo lovers are very enthusiastic about a few of them, such as:

Unless you’ve been living in mountains since birth, you should be knowing about the famous American Horror Story. It’s a spooky television series where each season contains a storyline full of drama and chills, which will make you sulk in fear.

It was broadcasted on FX, with stars like Sarah Paulson, Evan Peters, and Emma Roberts making people crazy and love the show. This also makes it very popular among the horror tattoo lovers to take inspiration from.

Not only the images of AHS but also the quotes such as “Normal people scare me” and ” All Monsters are human” are popular as a tattoo design among tattoo lovers.

Back in 1975, a film called The Rocky Horror Picture Show came out. It was written by Richard O’ Brien and people love it till now.

Not only it was an entertainer it had a very good social message as well which was, that you should never follow the society, you should be whatever you want to be, and you shouldn’t be ashamed of yourself and most importantly: “Don’t dream it, be it”!

Horror tattoos will never go out of fashion, and these mind-blowing designs will keep amusing and attracting tattoo lovers, we have composed a collection of some awesome and frightening horror tattoos for you, have a look: