Letter tattoo is an excellent method to silently express yourself, you don’t need to shout out loud about what you stand for, what you believe in, and what is that thing you want others to get from you.

Getting a pattern as a tattoo is great but it is often susceptible to others interpretations. Hence, people often go for Letters tattoo designs to be specific and clear.

There are few important points which you must consider while going for a Letters tattoo, the first and most important is the readability of the tattoo. When you are deciding the size of the tattoo, you have to figure out how easily you want others to get it.

It is not necessary that you make a tattoo easily readable for others, it is your property you can do whatever you want with it. but the size of your tattoo should match with the readability you desire.

Second, is the placement of the tattoo. You can have anything written on you, it could also be something very emotional and intimate to you. Since, tattoos are not just a way of expression, but also an indication of your sentiments inscribed on you. Hence, choose the placement accordingly.

There are almost 6500 languages spoken in the world, you can have a letters tattoo in any of them. But people often look for an artistic touch with a symbolic significance of a letters tattoo. Hence, few of the languages are quite popular such as,

One of the most popular languages in the world is Mandarin Chinese, which is spoken by almost 1,213,000,000 people. Also, it holds an excellent artistic value and is often a popular choice for the tattoo lovers looking for a letters tattoo. 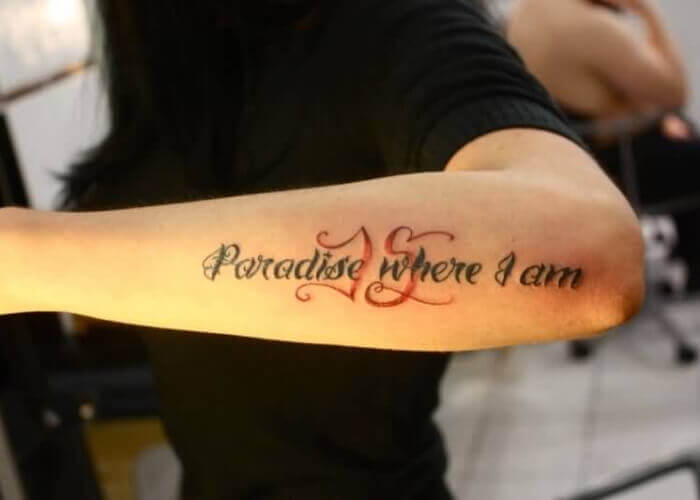 Latin and Greek were the official languages of the Roman empire. Also, there many words in English vocabulary who are inspired by the Latin language. The Roman letters and Roman numerals have good artistic looks, which makes them an attractive choice for tattoo lovers looking for a letters tattoo.

Once you have finalized the language, the other important aspect of a letters tattoo is the font used. An attractive font can make the tattoo astonishingly appealing. In each language, you can find multiple fonts to express the same sentiments. Do consider the readability while choosing the font.

Letters tattoo is indeed a great choice for a meaningful yet beautiful tattoo, it is quick to communicate with others and look really cool too. Check out our collection of trending letters tattoos. You will love them!