A tattoo is an art which reflects the commitment and faith of an individual & Religion is nothing but the set of belief which guides an individual to live a peaceful holy life. Hence, Religious tattoos are rightly making a big way for the ever-lasting mark showcasing one’s faith in the spirituality.Religious tattoos are the next thing which is going to hit the tattoo industry. Different religions are expressed through tattoos through either their faith symbols or through the figures fathering the very religion.

The inked spiritual icons shouts loud about the belief, culture and community one believes in.The different religions hold unique preaching and beliefs. And when these beliefs are portrayed in an art form, Religious tattoos take the shape of existence.The most demanded religious tattoos are based on the religion of Buddhism, Hinduism Jewish, catholic & Islam. Let’s us give you an exact idea about these religious tattoos. 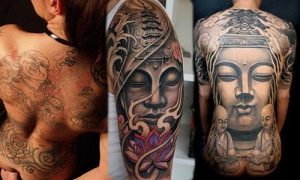 The lotus flower (Wisdom & purity), Dharma wheel with eight spokes, The Umbrella(Symbol of protection), The fish(Freedom), The conch shell, The victory banner, beautiful vase, endless knot, The leaf or the Bodhi tree, Buddha’s footprint, Swastika, wisdsom eyes, The three Jewels are some of the symbols which not only represents Buddhism but are also favored tattoos art. 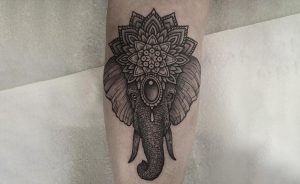 Hinduism is considered the oldest religion on the earth having many gods, goddess and numerous symbols each having a spiritual meaning. These symbols are widely used as tattoos in the western countries as well as in India. These symbols are Aum, Swastika, Trishul, Tilak, Yantra, kalash, Nandi, Ganesha, Shri, Sudarshan Chakra, Cow, Peacock’s feather, Paduka, Damaru, elephant, snake, eagle and the list goes on. And the most important part is all these symbols have a great deal of aesthetic appeal along with its deep spiritual aura and meaning. 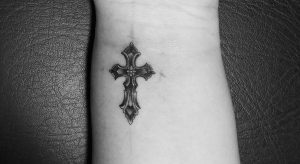 Catholic religion advocates the preaching of Lord Jesus through churches and holy bible and they too have many holy symbols. Some of the most famous catholic tattoos are The Cross, The Sacred Heart, IHS and Chi-Rho,The Fish,Fleur de Lis, The Dove, Crossed Keys, The Lamb, Alpha & Omega & Crucifix. The crucifix is the most commonly asked tattoo design which shows the figure of the body of Jesus Christ attached to the Cross. 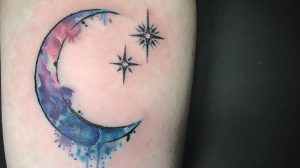 Just like Christianity, Islam too discourages the symbolic representation of the religion. Though, the most famous one is the Star & Crescent. Also the verses written in the Arabic language are popular owing to cursive flow along with its royal & mysterious look. 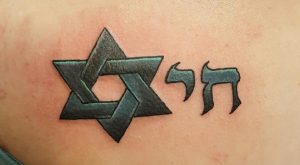