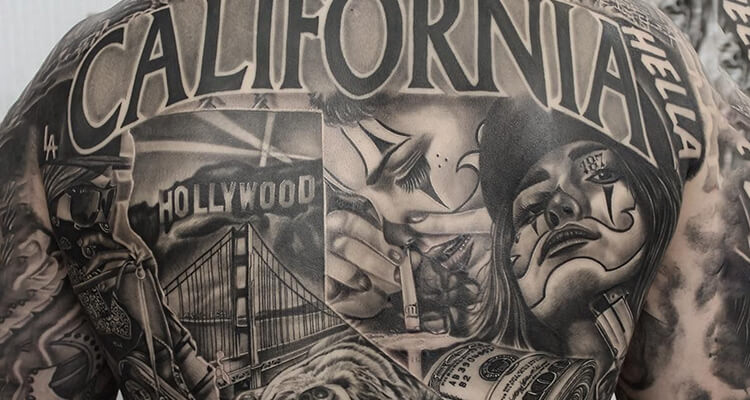 Chicano tattoos are non-fictional, and are inspired by the real-life instances and experiences of the migrated Chicano community in America. Being unwanted, the Chicano community always faced issues while fighting for their rights, and struggling for status quo.

The popularity of these Chicano art patterns in prison and street culture of America was very evident from many historical instances. These beautiful tattoos were a representation of the emotions of the people and their resentment for societal discrimination towards them.

They are drawn in black color and mainly contains bold images and patterns, holding deep hidden meanings, who might be unknown to common people but hold a very deep and emotional significance for the Chicano community.

Let us look at the history of these interesting tattoo designs and find out about the various influences it underwent. 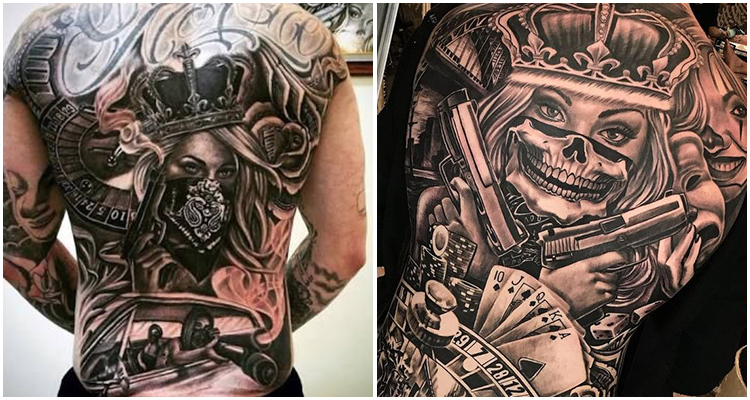 The word Chicano or Chicana was used as slang by American people for immigrants from Mexico. Later, it was used as an insult, to address people from Mexican origin.

This inappropriate use of slangs led to Chicano uprising around the 1960s, which introduced dynamic and impactful tattoo designs to the world. Initially practiced and created by prisoners of Mexican origin, the delicacy, thoughtfulness, and impact of Chicano art tattoos, is unmatched. 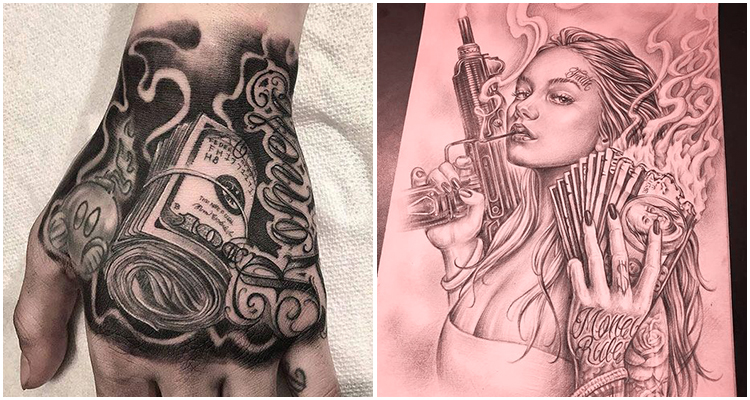 During the 1960s, there was a new political uprising, based on the eastern principles of non-violence. instead, the artistic creativity was used as a weapon to fight against political and social discrimination, towards the Chicano community.

The adolescent Barrios were very expressive through their impactful designs on the walls, taunting the social and political settlement of that time in America.

Not only the walls of the city were filled with beautiful Chicano art pieces, but the Chicano art movement was rapidly expanding its reach into music and theatrical art. 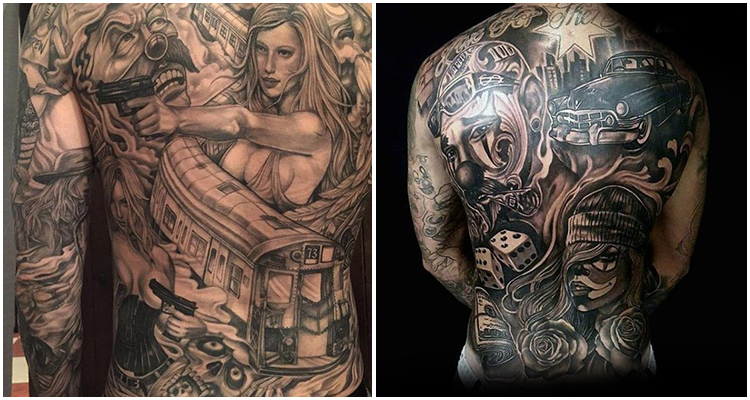 The Chicano art movement took a new turn when it is was adopted by the gang culture to show allegiance and support for certain groups. These tattoo designs were engraved using tools such as needles, wires, and ballpoint pens.

These tattoo designs were made using simple black ink. The use of black ink was predominant because of the lack of resources at that time in prison, which later transformed into full fledge tattoo designs.

The common patterns in Chicano tattoos included money, sex, power, women, nature, religion, etc. Since all of them are the major driving forces in society at that time, and even now. Hence, these elements were highlighted in different patterns, to express different emotions. 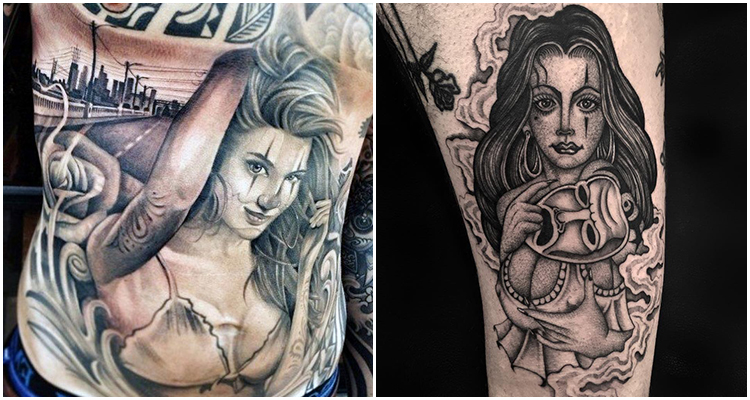 At that time, the pachuco cross was a strong symbol of Chicano ideology, a little cross between fingers and thumb, was a symbol of undeniable dedication and reverence for the gang and its purpose.

For normal people, the Chicano art movement was a symbol of criminal activities and a filthy part of society. But, for the Chicano people, these tattoo designs successfully depict commitment towards their community, family, love, and faith.

The later development in this art movement came through beautiful designs drawn with pens, on bedsheets, handkerchiefs, and cloth pieces. This was a prison art and was very popular in Southwest America. 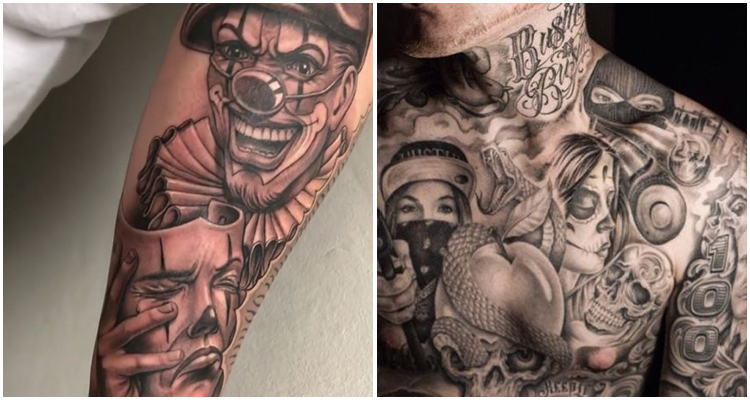 This art got popular with the name ‘PANOS’ which was derived from the Spanish word ‘panuelo’ which mean handkerchief. Prisoners used to send these beautiful art pieces back to their home and used to draw patterns to express their love, gratitude, care, and secret messages, to their loved ones.

Apart from that, these Panos art pieces were also used to send messages to fellow gang members, inside or outside the prison. Hence, the complete cultural significance and operational usage for gangs, made the Chicano movement a fast-growing art, at that time.

The patterns used in the Panos art movement were inspired by the Chicano movement and depicted the street life, full of violence, money, women, scarcity of resources and prison.

The Chicano art movement represents serious sentiments of the Chicano community, who shifted to the US, and after years of discrimination and oppression, they made their place in the society, in their own ways. 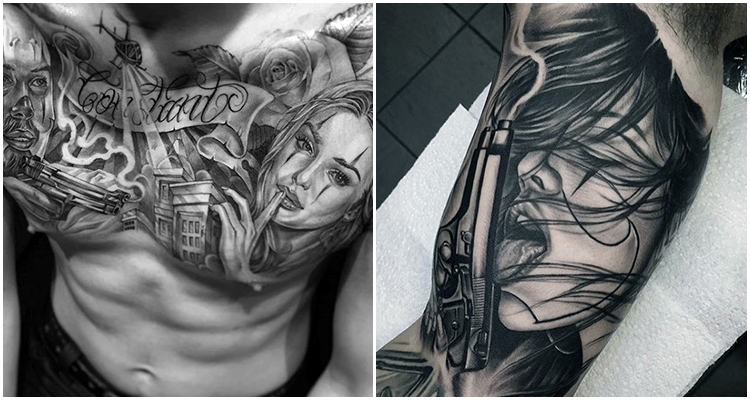 The patterns used in the Chicano art movement were mainly inspired by the political atmosphere of that time and with the use of religious symbols, the Chicano art patterns were an attempt to provide validity to the struggling Mexican community, at that time.

Also, since the Chicano art was openly practiced in prison, it also had an emotional touch, containing feelings of loss, sorrow, frustration, and love for the family members.

Battling through time, political suppression, and social misinterpretation, the Chicano art movement has grown into a beautiful and trending tattoo design, who is very popular among tattoo enthusiasts, across the globe.

The Chicano patterns will always represent emotions, sarcasm, faith, and fun. In the long course of time, they frequently got influenced by different art movements, which gave way to the modern avatar of Chicano tattoos.

The Culture References in Chicano Tattooing

The Chicano art movement has always been full of impressions and images, who were very close to the sentiments of the Chicano community. Chicano tattoo art reflects their struggle against the discrimination and oppression of their people.

Majority of people were living on the edges of cities in suburban areas, deprived of good living conditions and continuously feeling left out from the mainstream.

This was also the reason, that Chicano community people are so particular and committed to safeguarding their culture and preserving for their next generations.

A strong need to stay together often results in a high degree of belongingness and unity, among the members of the minority community. 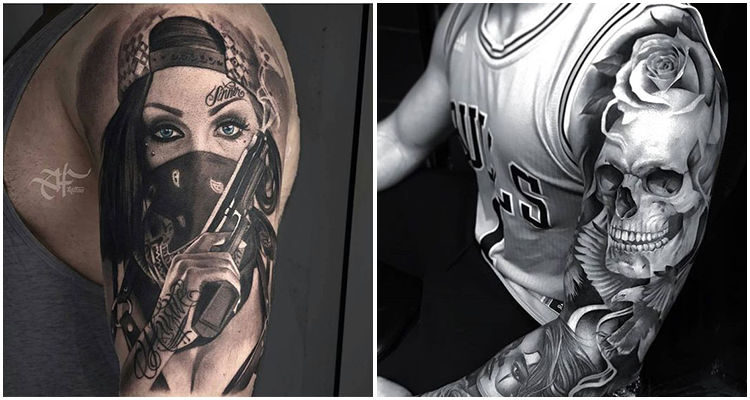 With an increasing population of immigrants, the discomfort among society increases, which often resulted in violent encounters between Chicano youth and the administration. The Zoot Suit riots were one of the many violent clashes, that took place at this time.

This was also the reason, that since its emergence, the Chicano culture was an unfavorable cultural development, which was foreign and hostile for the local communities, especially, in Texas and California.

The political oppression of views and sentiments of the Chicano community was one of the major influences, that led to various evolution in the ways of expressing through Chicano art patterns. Making it more appealing, deep, insightful, and significant. 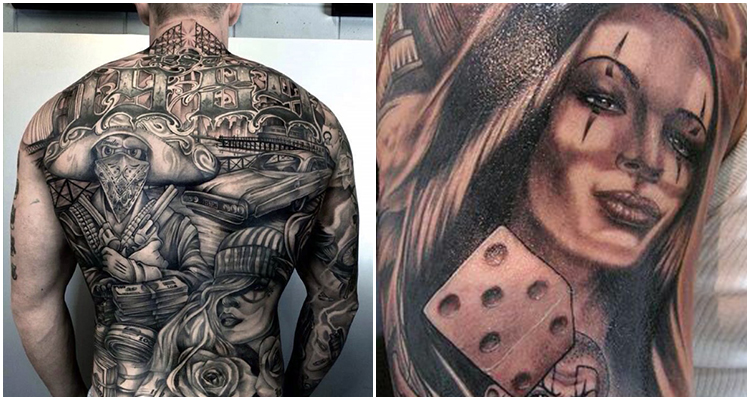 With the new generation, getting inspired by the new trends and influences of other western cultures, the look, and feel of Chicano art was bound to change. With their new ideas and energy, the Chicano youth was redefining this art movement like never before.

Also, the charisma and appeal of this new and enhanced Chicano tattoo art were majorly inspired by local heroes, living their life behind bars and influencing their community people to stay strong and flourish.

Not only the messages and patterns used in this tattoo art were attractive, but also the way these beautiful and thoughtful designs were drawn, made them very famous among people across the world. 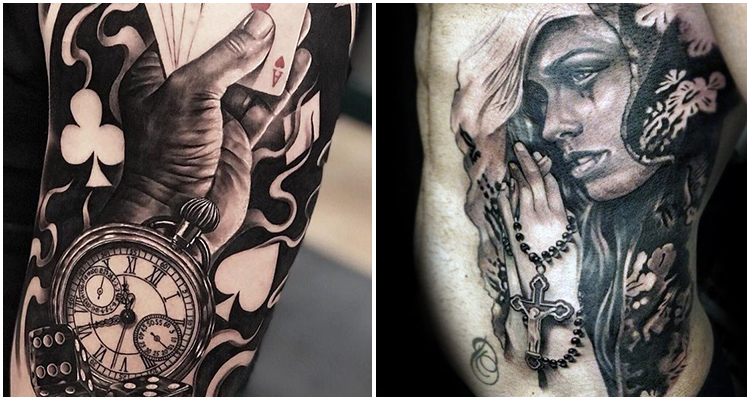 The use of basic household material to create impeccably beautiful and astonishingly deep patterns, such as ballpoint pen, metal wire, normal ink, etc. These Chicano tattoo designs are the real symbols of machoism and reverence.

Suddenly, these thoughtful designs, full of sexy ladies, money, violence, struggle, family, religion, faith, and unconditional love, changed their canvas from handkerchiefs and pillows to the human skin, and paved way for the new tattoo revolution, the Chicano tattoos. 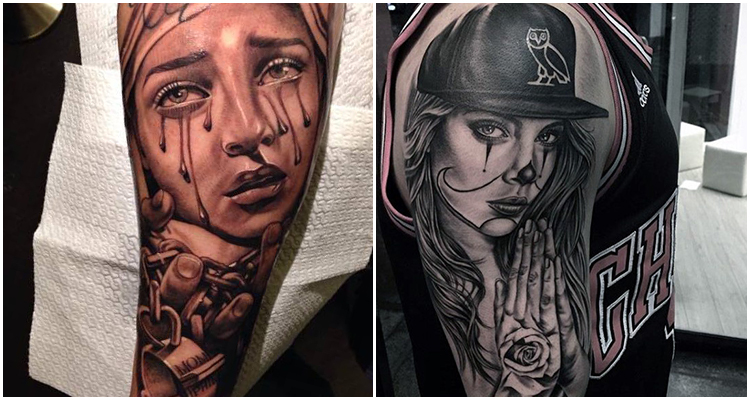 With the emergence of Chicano tattoos, the young generation expressed their blunt and truthful thoughts and views, by engraving themselves with impactful Chicano art patterns.

These sarcastic, blunt, beautiful, and gangster tattoo art is authentic, genuine, and straight from the heart. Chicano patterns are drawn out of real-life experiences.

They are expressed out of real tears of joy and pain. The biggest influence on Chicano tattoos was by hunger, poverty, pain, struggle, faith, circumstances, and deficiency.

The cultural significance of Chicano tattoo art is so deeply tangled with the deep sentiments and emotions of the Chicano community, that it is really hard for any outsider to connect to their meaning unless he/she is already aware of Chicano history.

Still, the craze and attraction of these beautiful and thoughtful pieces of art are unmatchable. Today, tattoo lovers really appreciate Chicano tattoo style and love to engrave themselves with these historic yet freshly fashionable tattoo designs.

These widespread sentiments of acceptance towards Chicano art are assisting this notorious tattoo art to reach all parts of the world, and motivating people to follow and appreciate this art, inspired by real-life scenarios. 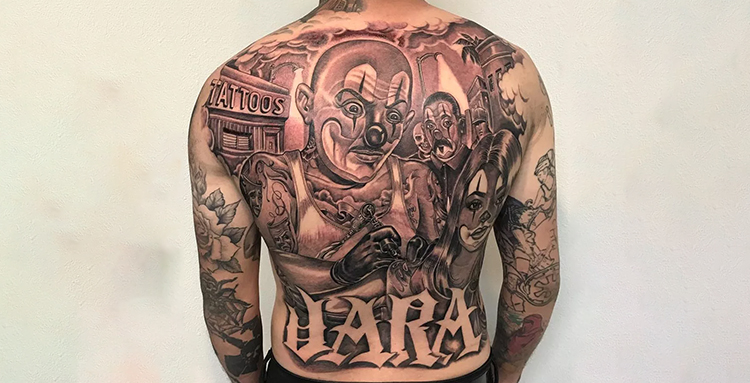 There are many theatrical pieces, even movies based on the life of immigrants, who fought their way upward in the society, to bring their people among the elites, or in a reputable life.

Though the stories and history related to Chicano art movement are amidst the cloud of criminality, prison life and street gang experiences, it always spread the message of love and togetherness to other people.

Around the 1970s, the emergence of the various tattoo artist really helped the Chicano movement to spread its wings, and become invincible by introducing new things at the right time. 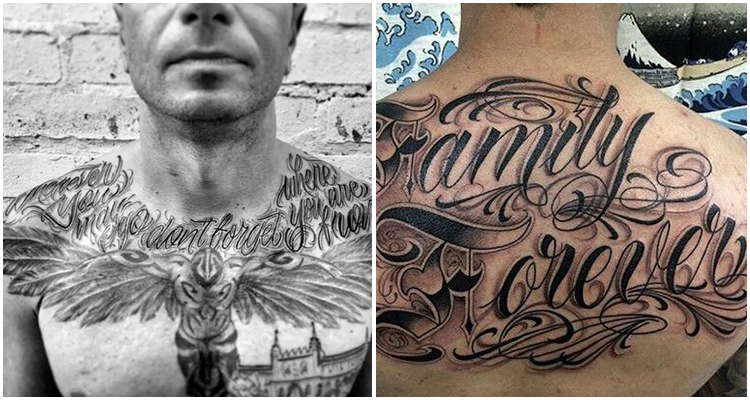 The fondness of modern tattoo artists towards the patterns of Chicano tattoo art has made this cool and sentimental way of expression a hit across the globe, that too in different cultures. The modern face of this historic, personal, and non-fictional tattoo art, is really charming, appealing and thoughtful.

It reflects the endless struggle, determined hope, and tears of joy and pain of Chicano people, and how this art transformed into its latest trend, we all see today. Chicano art is the live manifestation of emotions and experiences of their community, and how they struggled in the course of time to bring back, what was lost.

Still, the beauty, aesthetics, and meaning of Chicano tattoos are so deep, that it can touch strings of the heart of every glance in seconds. These Chicano patterns are kinky, naughty, and beautiful at the same time.

They are badass designs, which signifies and communicate bold and blunt messages with ease. For every person who wants to engrave their body canvas with Chicano modern art patterns, can do it easily, that too, to convey impactful thoughts, using naughty, fun, and cool images and designs.

If you are planning to have one of your own, it is really a great idea. You can have them anywhere you want on your body, ranging in different sizes. And, saying a heart touching story, every time someone looks at them.