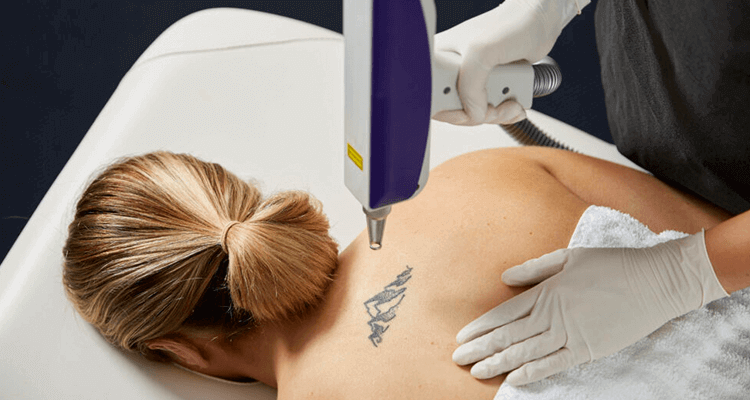 Bored of your previous tattoo? Or trying to get a new one at the same part of your body? There are many techniques for laser tattoo removal. The most common one is the Laser Tattoo Removal. It uses some physical properties of thermolysis (photoselective) to remove the pigment of the tattoo.

The current technique is the Q-switched lasers which doesn’t have any adverse effects. Tattoos which are not removed by other basic treatments then laser tattoo removal will be the best option.

While you’re having your laser tattoo removal, the doctor will make you wear protective eye shields. The skin’s reaction to the laser therapy is also checked to be effective for the treatment. Once the treatment is over then an immediate ice pack is applied on the part of your body to soothe the treated area. Once everything is done, the patient will be asked to apply antibiotic cream on it and later a bandage will be used to cover it from the sun.

There are a few side effects of the Laser Tattoo Removal

If any patient has developed any allergy to the tattoo then it will appear as an allergic dermatitis with a specific color area. It depends on the skin type, you may have a chance to get a permanent scar on the tattoo removal area. Some people also tend to have irritation or a swell after this treatment. There are a few rare cases as well that the patient will have a pus which will last for around a day or two. Sometimes you can also get fever, chills or hot flashes due to the exposure to laser for a long period of time, as generally tattoo removal takes time.

This is another side effect that some people get where the skin gets paler than the surrounding area/skin. This can be both temporary and permanent pigmentation. In the majority of cases this is temporary and can be cured with the help of some steroid creams and other treatments.

This is also similar to hypopigmentation, the only difference is that in hyperpigmentation your skin which is treated gets darker than the surrounding area/skin. It can be both temporary and permanent type of pigmentation and it can also be avoided by taking aftercare of the portion which is treated. It can easily be reversed by massaging the treated area and also using Vitamin E oil.

This is a side effect that might come in tattoos like a lip liner or an eyeliner one. It may darken due to this treatment of laser tattoo removal. Although these vary from people to people and are not necessarily going to hit any particular person.

You should definitely seek medical emergency if you’ve developed any swelling around the treated area for more than two days. As it might lead to a greater pus and can damage that part as it is already sensitive and should be protected from dust, sunshine and other things that might harm it or cause another allergic reaction.