What Should You do if Your Freshly Etched Tattoo Begins to Leak?

Home About Tattoos What Should You do if Your Freshly Etched Tattoo Begins to Leak? 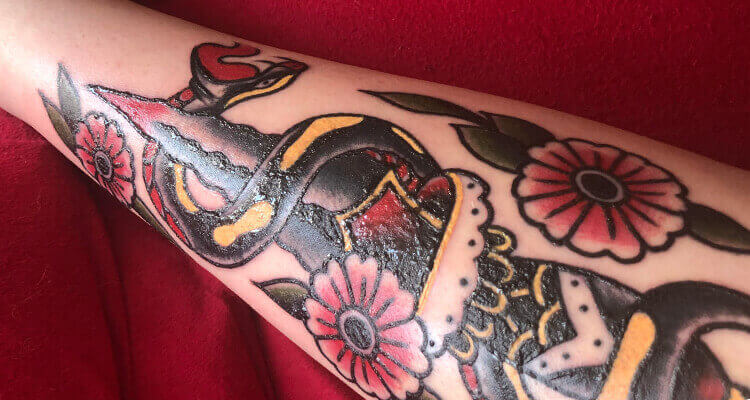 What Should You do if Your Freshly Etched Tattoo Begins to Leak?

Getting a tattoo is a thrilling experience; you go through a roller coaster of emotions, pain, and relief to get that perfect ink on your body. However, new tattoos can misbehave and cause some concerning issues, such as leaking.

A new, fresh tattoo is an open wound, and our body reacts the same way as it would do to any other wound; it removes excess ink, blood, and plasma before it can begin to heal. Tattoos are intended to leak a small amount of ink, blood, and plasma for a day or two after the appointment. However, anything beyond that is cause for concern.

So, without any further ado, let’s get started…

Tattoos leak for a variety of reasons, such as:

Consumption of alcohol. Consuming alcohol prior to getting a tattoo is one of the significant causes of tattoo leaking. Know that consumption of alcohol is not allowed before and immediately after receiving the tattoo. Because alcohol thins the blood, it can cause excessive bleeding and ink/tattoo leaking days after the tattoo has been completed. However, some people prefer to drink before getting inked, primarily to endure the pain. Nonetheless, no professional tattoo artist will ever tattoo a person who is visibly intoxicated.

Use of blood thinners. Tattoo leaking is more common in people who take blood thinners. This is because blood thinners prevent the formation of a blood clot, which is required to stop any type of bleeding, due to which the blood does not clot immediately after receiving a tattoo. As a result, the tattoo begins to leak the blood and all the excess ink. People with blood clotting disorders or immune system disorders also suffer the same issue. In such cases, the leaking is heavier than usual, which may cause the tattoo to bleed slightly.

Function and behavior of the immune system. As said earlier, the tattoo is a kind of an open wound. Whenever you get a new tattoo, your immune system reacts, and the body attempts to push out the excess ink so that it does not harm the body. As a result, fresh tattoos leak not only ink but also excess blood and plasma. On average, such leaking lasts between 24 and 48 hours.

A freshly etched tattoo typically leaks between 24 and 48 hours after they are applied. The leaking should stop around the second day after tattooing when the wound closes, and the blood begins to clot properly. After that, the tattoo begins to heal, dry up, and take on its final shape.

However, if a tattoo begins to leak in the middle of the healing process, it’s a matter of concern. It could be some tattoo inflammation or ink allergy, which is often accompanied by tattoo redness, swelling, itching, and tenderness. If this is the case with you, immediately seek medical help. If you’re taking blood thinners, the leaking should stop after 48 to 72 hours. If not, you should seek medical attention as soon as possible.

If your tattoo leaks excessive ink for a very long time, you must see a doctor. Know that a tattoo becomes susceptible to infection when it is exposed to fluids and moisture for an extended period. So, get it treated as soon as possible.

A little bit of leakage in a freshly etched tattoo is okay. However, if the tattoo bleeds ink or blood for a longer period, you must take preventive measures, which are as follows:

Undoubtedly, leaving the bandage or tattoo wrapping on after returning home from a tattoo appointment is critical. In the event of excessive leaking, remove the bandage and wash the tattoo with lukewarm water and antibacterial soap. Make sure you use fragrance-free soaps to avoid irritation and possible inflammation.

You should avoid applying ointment if your tattoo is leaking. Let your tattoo naturally stop leaking. Only when your tattoo stops leaking will the healing begin. Once it has stopped leaking, it’s time to apply moisturizer. Make sure you use organic, fragrance-free ointment or moisturizer. Even so, you should only apply a thin layer of ointment twice a day. Don’t overdo anything.

3: Avoid exposing your tattoo to water

Your tattoo needs to be protected from water for at least a few days. It doesn’t mean you can’t bathe; of course, you can. BUT no long baths or showers. Showering should last up to 10 minutes until the tattoo begins to heal. Soaking the tattoo will only prolong the leaking and prevent the skin from closing.

4: Change your sheets on a regular basis

We all know that a leaking tattoo can make such a bigger mess and instantly destroy your sheets or clothes. It is critical to replace dirty bed sheets with clean ones on a regular basis to keep the tattoo infection-free. This prevents the accumulation of bacteria, germs, and other harmful particles that could enter your tattoo as it leaks.

5: Avoid pulling the sheets away from tattooed skin

Sheets sticking to your tattoo in the event of tattoo leakage are normal. If this occurs, make sure not to pull the sheets away from the skin. Tattoo leaking makes the skin sensitive. Pulling your tattoo from the sheet can harm the sensitive tattooed skin, cause excessive leaking, prolong the healing process, and even result in a tattoo infection.

So, it is recommended to gently rinse the clogged area with lukewarm water until the sheet falls off on its own. After that, pat the skin dry and apply an organic, fragrance-free ointment.

6: Avoid consuming alcohol before and after a tattoo

Finally, the consumption of alcohol before and after getting a tattoo should be avoided. As previously stated, alcohol acts as a blood thinner. Alcohol actually dilutes your blood, leading to heavier bleeding and leaking. All this leads to a faded, patchy, and messed-up body artwork. So, avoid consuming alcohol before or after getting a tattoo. Alcohol can make it difficult for a leaking tattoo to stop leaking, whether it is leaking blood or ink. You should wait to drink alcohol until your tattoo has healed.

Of course, the next important question….

Let’s see what it is…

WHEN SHOULD YOU SEEK MEDICAL HELP?

If your tattoo has been leaking for more than three or four days, something is wrong. If the leaking is accompanied by redness, tenderness, swelling, increased pain, pus, or even fever, seek medical attention immediately. Don’t take all these symptoms lightly. It could be a tattoo infection or an allergic reaction to the ink, which cannot be treated at home. Consult a doctor; he may prescribe some antibiotics to reduce inflammation and prevent further damage after a thorough examination.

So, that’s all for now! Hopefully, this article has been enlightening for you and helps you know what you should do if your freshly etched tattoo begins to leak.

As said earlier, a brand-new tattoo tends to leak for a day or two. So there is nothing to worry about! Simply follow the proper aftercare routine and keep your tattooed area clean always.

However, if it continues to leak for an extended period, it’s a sign that you need professional help. Seek medical attention and have a thorough examination right away.