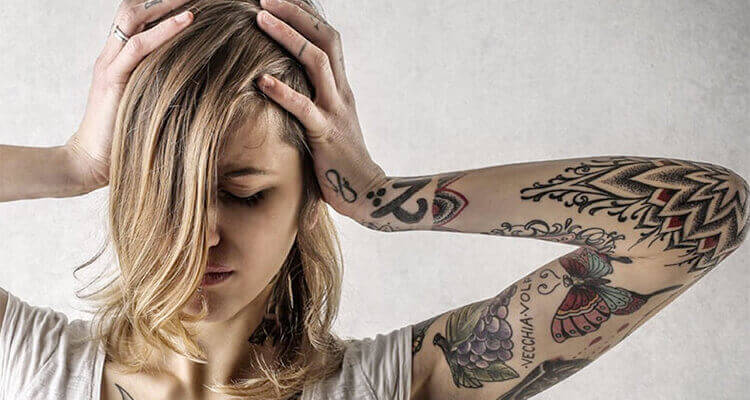 Do you regret your tattoo??? Or do you have tattoo regrets???

If yes, then let me tell you – you’re not alone! Tattoo regret is widespread these days. Many people are experiencing “tattoo regret” and are opting to have the ink removed. According to research, 78 percent of people regret at least one of their tattoos. And roughly 19% of people who have two tattoos regret both.

Tattoo regret could be caused by anything, from an old flame’s name emblazoned on the body to a tattoo inked on the spur of the moment. Whatever be your reason, the good news is you don’t need to remorse it.

We are living in an age where things are easy and possible. Here in this post, we’ll share how to get rid of tattoo regrets.

WAYS TO GET RID OF TATTOO REGRET

IMPORTANT TIPS TO CHECK OUT

BUT, before starting the topic, let’s first look at why most people regret their tattoos.

This can occur as a result of the artist’s inexperience or simply the tattoo fading with time and age. Our bodies change as we age, so if your skin has sagged or you’ve gained muscle, the tattoo may be distorted, due to which your tattoo starts to appear unappealing.

Visible tattoos are more likely to cause regret than tattoos that are hidden beneath clothing or are not visible to the owner. The most common reason for this is boredom. Yes, if a tattoo is easily visible, it is common for people to grow tired of it.

Another reason tattoo wearers regret their tattoos is the size of the tattoo. People who get their tattoos etched hastily are more likely to develop this remorse over time.

5. Name of Old the Flame

“LOVE IS BLIND,” as someone correctly stated. Don’t be offended; I’m just kidding) However, when it comes to tattoo remorse, especially among millennials, one of the most common reasons is name tattoos. Young people frequently have their girlfriend or boyfriend’s name etched on their bodies to express their love. However, following their breakup, the same tattoo becomes a source of pain for them.

People who get tattoos from different languages frequently end up regretting them. The reason is simple: they don’t do enough research on the word or phrase they want tattooed, as Rihanna did with her Sanskrit tattoo.

Ri has got a quote from Sanatana Dharma etched on her hip. The Sanskrit prayer on Ri’s hip was supposed to translate to “forgiveness, honesty, suppression, and control.” Unfortunately, the tattoo was misspelled and actually meant “long-suffering, truthfulness, self-control, inward calm, fear, and fearlessness.”

7. Reason for Getting the Tattoo

If you literally ask some people why did they get their artwork? They won’t be able to answer their WHYs! As they themselves don’t know WHY. Your tattoo should be a reflection of “WHO YOU ARE.” However, most people get tattoos on impulse; due to peer pressure; they liked their friend’s tattoo or want to look cool, rather than because they genuinely wish to.

So, these are some of the reasons for tattoo remorse for many people. Now let’s talk about the ways to get rid of tattoo regret.

Ways to Get Rid of Tattoo Regret

Get rid of tattoo regret by getting it removed. Yes, you read it right! The only and the best way to get rid of your tattoo remorse is to simply remove it.

Well, there are three ways to get rid of your tattoo, here are those:

For each color, the laser sends light pulses of varying wavelengths for fractions of a second. The pulses rupture the ink inside skin cells into tiny particles, which the lymph system picks up and the body gradually excretes. A local anesthetic is administered to alleviate pain. Laser usually produces the best results, but it can take six to twelve sessions, depending on the size and colors of the tattoo, the patient’s skin tone, and other factors. Each session can cost between $250 and $1,000 for a small tattoo and $1,000 for a large one.

This method is best for removing a small tattoo because it leaves scars.

This means that large tattoo removal results in a large scar. After the surgery, the skin feels tight. You will also need to take extra care of your skin after the surgery. Your doctor will prescribe moisturizing lotions and other ointments to keep the skin free of infection and moisturized. Surgical removal will set you back around $150 to 350.

Finally, we have Dermabrasion. Dermabrasion is one of the most infiltrative tattoo removal methods that does not involve the use of a laser. To remove your tattoo, you will need to sand the upper layers of the skin. A rapidly rotating disc scrapes off the top layer of the skin, allowing the ink particles to be leached out. The success of this method is heavily dependent on the size, layers, and colors of the tattoo.

As previously stated, this is an invasive method; people with sensitive skin or other skin conditions may have issues. Dermabrasion is not recommended for them. Aside from that, people with dark skin should avoid this treatment because it can cause pigment changes.

Aside from these, there are some home remedies to get rid of tattoo regret, such as Salabrasion, Exfoliation, Tattoo Removal Creams, and so on. These methods, however, are not as effective as the methods mentioned above.

Important Tips to Check Out

However, because “PREVENTION IS ALWAYS BETTER THAN CURE,” here are some important tips shared by experts that you should follow before having a tattoo removed.

So, these are the ways to get rid of tattoo regret. Of course, tattoo removal is a personal choice, but instead of removing it permanently, consider getting a cover-up tattoo. A cover-up tattoo is an excellent alternative to tattoo removal and a great way to get rid of tattoo regret. But, if you’ve made up your mind, the next step is to locate a specialist. There are numerous tattoo removal specialists available on the market. However, you must ensure that you find the best. Do not forget to conduct adequate research before deciding on one.