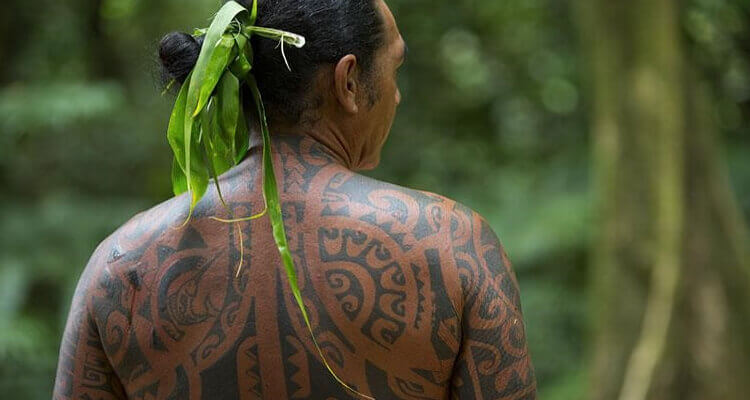 When it comes to tattooing, most people prefer to have Polynesian tribal tattoo designs because they look gorgeous. Polynesian tribal tattoo designs have gained immense popularity for the past few decades. The term Polynesian or Polynesia includes many tribes, such as Cook Islanders, Hawaiians, Marquesas, Maori Niueans, Samoans, Tahitians and Tongans,. All these tribes are said to have links with Southeast Asia. Primarily, the people who inhabit the islands of Polynesia are known as Polynesians. Polynesians have many traits in common, which include their language, culture and beliefs.

History of Tattoo Art in Polynesia

Polynesian tattoo history began in 1771 with Captain James Cook, who when returned to Tahiti and New Zealand from his first voyage, the word “tattoo” was introduced in Europe. He is said to have narrated the behaviors of the Polynesian people in his voyage, which he called tattaw. Also, he brought a Tahitian named Ma’i (who was tattooed at that time) to Europe, since then tattoos started to gain popularity in Polynesia. 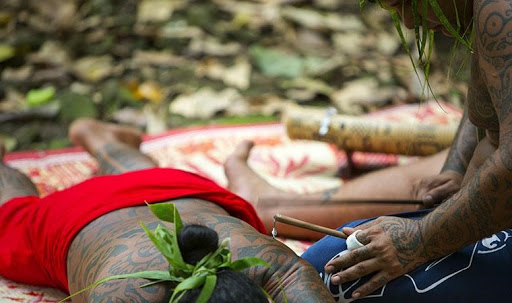 Though the tradition of Polynesian tattooing is more than 2000 years old; however, the Old Testament banned the art completely in the 18th century. The Tonga and Samoa tribes developed the Polynesian tattoo into a highly refined art. Tongan warriors were tattooed from their waist to the knees with a series of geometrical patterns, which mostly consisted of repeated triangle motifs, bands and also areas of solid black. While, the Samoan warriors get tattooed from their waist to their knees.

Well, the placement of Polynesian Tattoo Designs plays a significant role. These tattoos should be placed correctly based on their meanings. Each placement holds specific meanings based on where they are placed. According to Polynesians, the humans are considered descendants or children of Rangi (Heaven) and Papa (Earth), which were claimed to be united. Polynesians’ tattoo designs primarily focus on that union. According to Polynesians belief system – the upper part of the human body is said to have association with the spiritual world and heaven, whilst the lower part of the human body is related to the world or to earth. 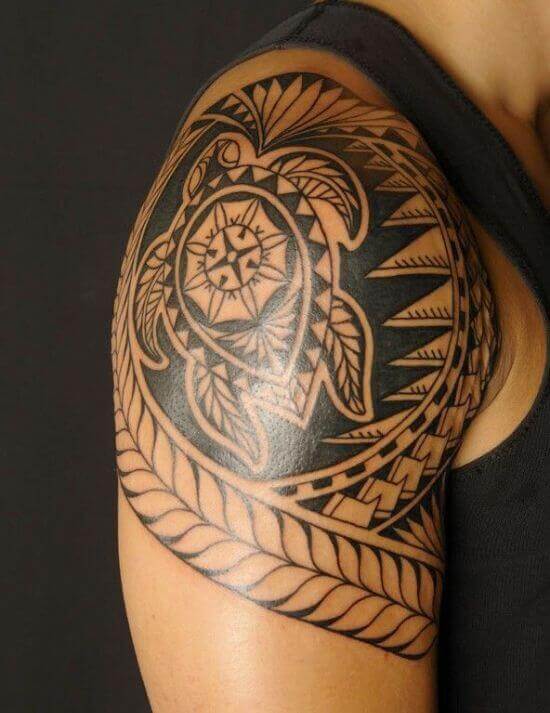 A beautiful tattoo design that you can get on your shoulder. 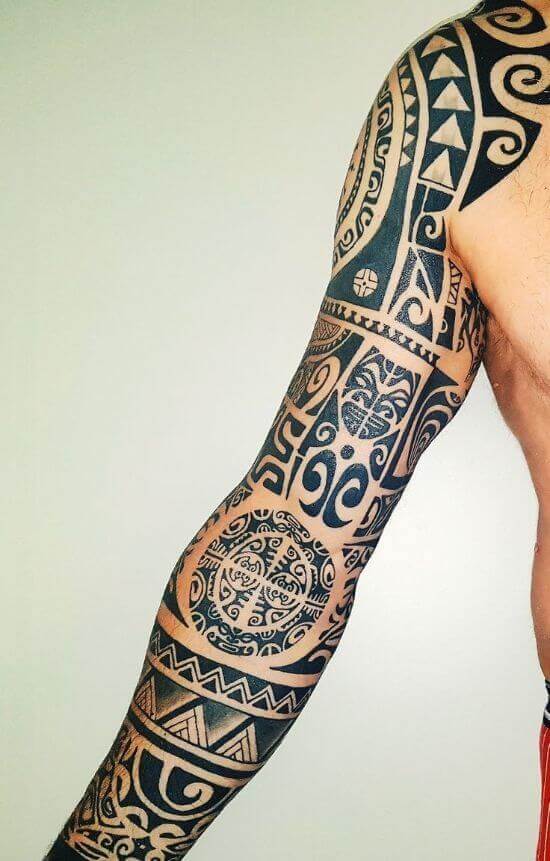 When it comes to Polynesian tattoo designs sleeve, you can get anything from an armband to an intricate Polynesian design. 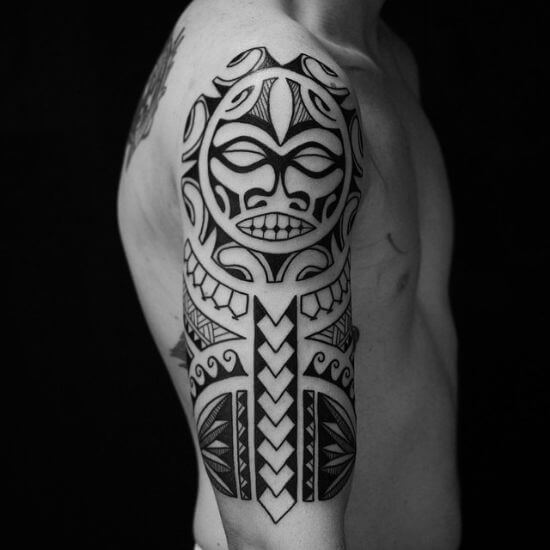 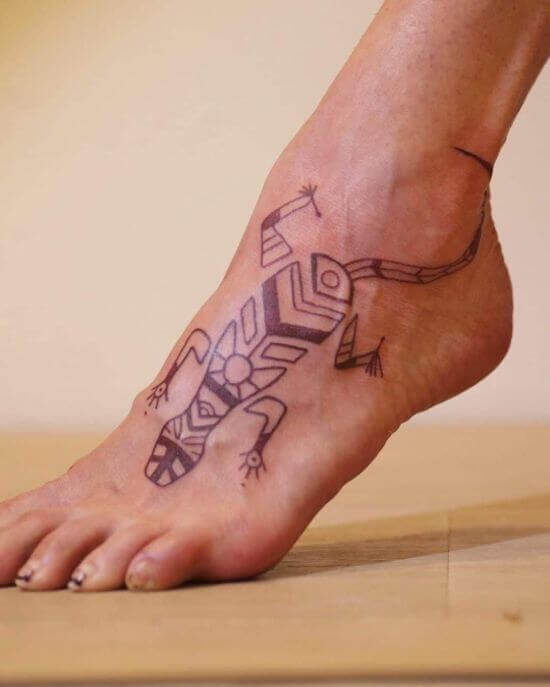 Get a Polynesian lizard tattoo on your feet, it will make for eye-catching tattoo design. 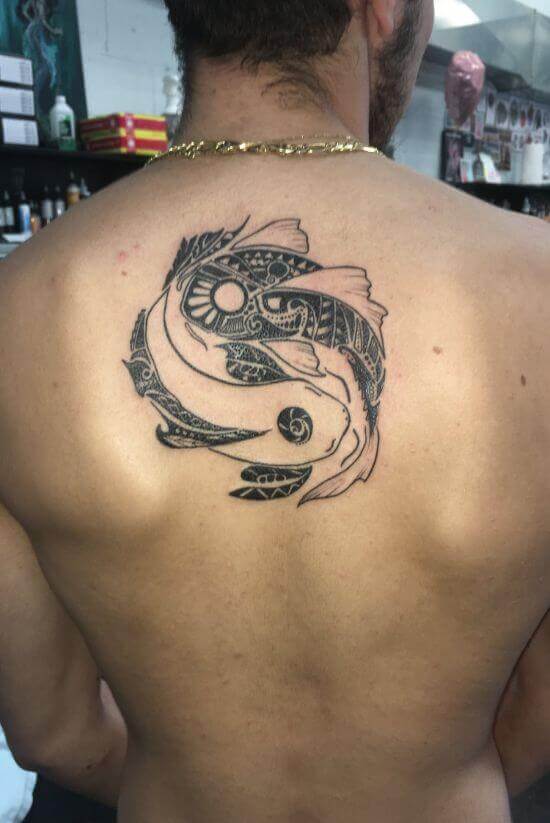 Polynesian koi fish tattoo designs look amazing. Get it etched either alone or with additional elements. It can be done in colored ink as well.

Another stylish tattoo design for the ones who are looking for an exceptionally beautiful tattoo. 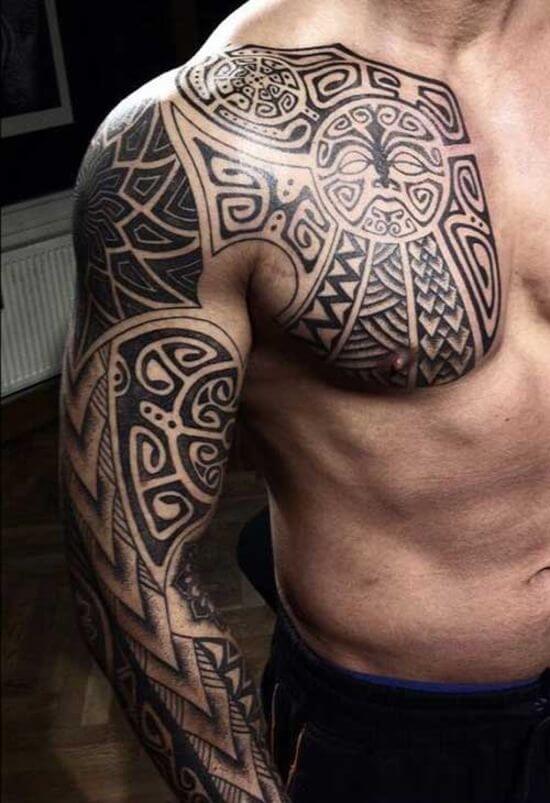 Maori is one of the most popular tattoo designs when it comes to Polynesian tattoos.

The Meanings behind Polynesian Tattoos

The Meanings behind Polynesian Tattoos vary according to their placement. Like:

Head Polynesian tattoos represent spirituality, knowledge, wisdom and intuition. As it is believed that the head is the contact point to Rangi.

Upper arms and shoulder Polynesian Tattoos represent strength and bravery and they are more associated with people like warriors and chiefs.

Lower arms and hands Polynesian Tattoos symbolizes creativity and creation. Hence, people getting tattooed on their lower arms are said to be more creative.

The area just above the navel till chest and is upper trunk area, which is said to symbolize sincerity, generosity, honor and reconciliation in one. Also, people getting Upper trunk Polynesian Tattoos simply display the balance between Rangi and Papa as the area is exactly between the both.

The area from the naval till thighs is termed as lower trunk. Polynesian tattoos etched on the lower trunk symbolizes life force or prana, energy, procreation, independence, courage, and sexuality.

Legs and feet Polynesian Tattoos represent moving forward, transformation and progress in life. Besides, they also relate to separation and choice.

Ankles and wrists represent commitment and union. As, joints in Polynesia represent union, otherwise also they do that job only. 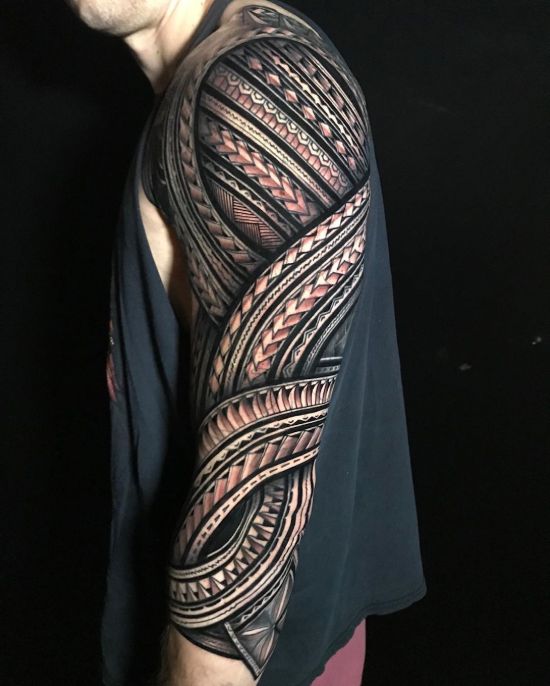 Tribal tattoos make for the best tattoo designs. If you are looking for a unique tattoo, then this is the one.

Get a Vector Somoan Polynesian Tattoo on your sleeves, it makes for an appealing tattoo design. 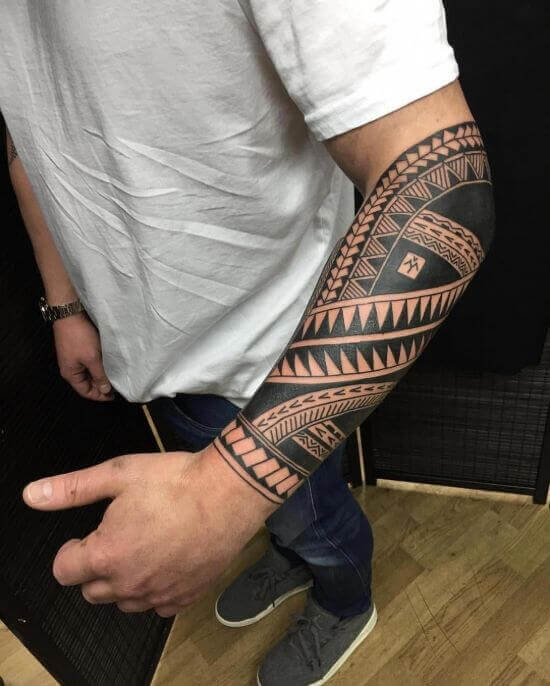 A unique and beautiful tattoo design for the ones seeking an outside the box artwork. 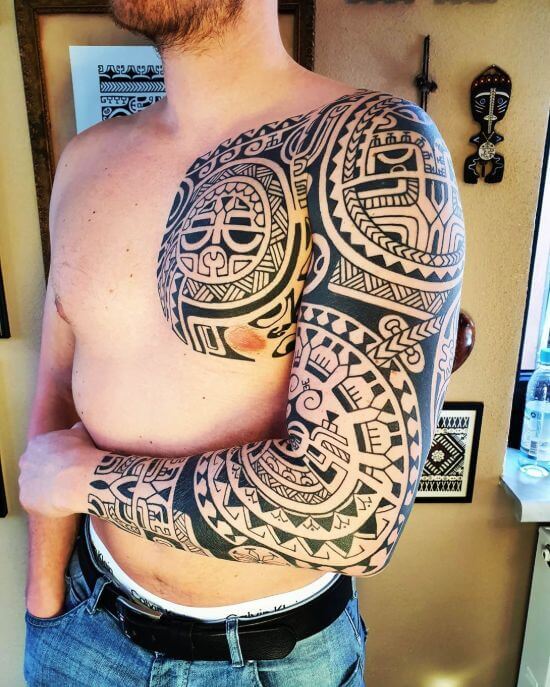 Club the two amazing elements and get the best tattoo design. 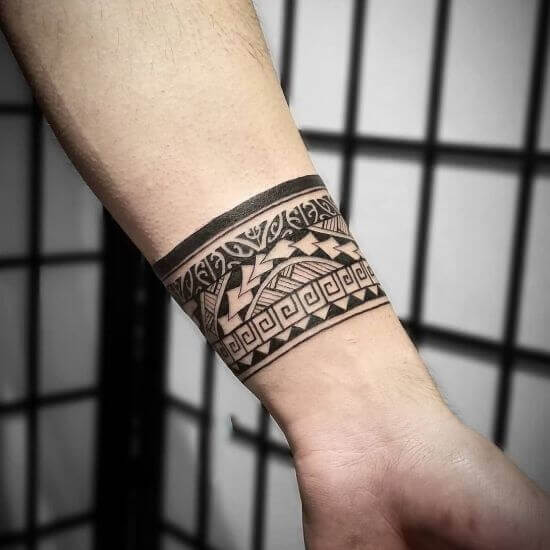 Polynesian wrist tattoos are for the ones who believe in connection and union. If you are also one of them, then get it etched. 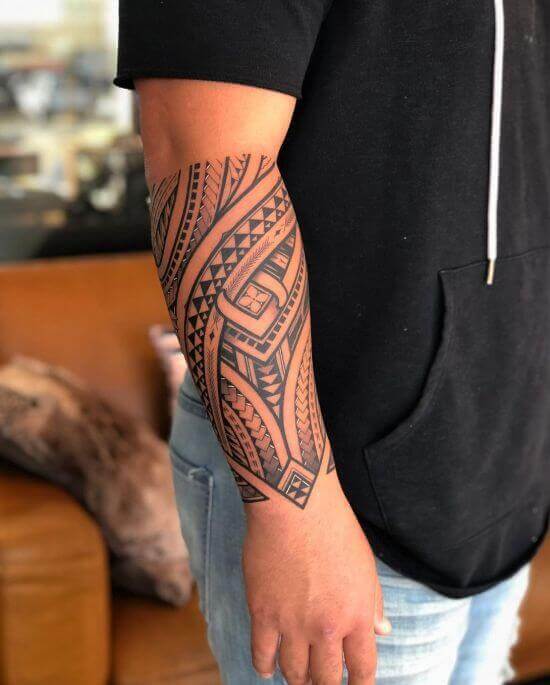 Get a Polynesia tattoo on your elbow, a unique placement, a tad bit more painful though. 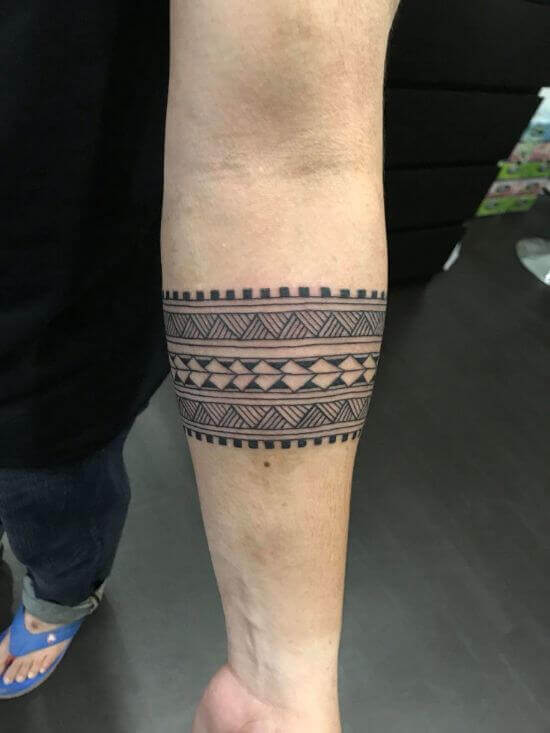 Polynesian armband tattoo designs are for the minimalists, who are looking for a design that is more simple yet elegant. 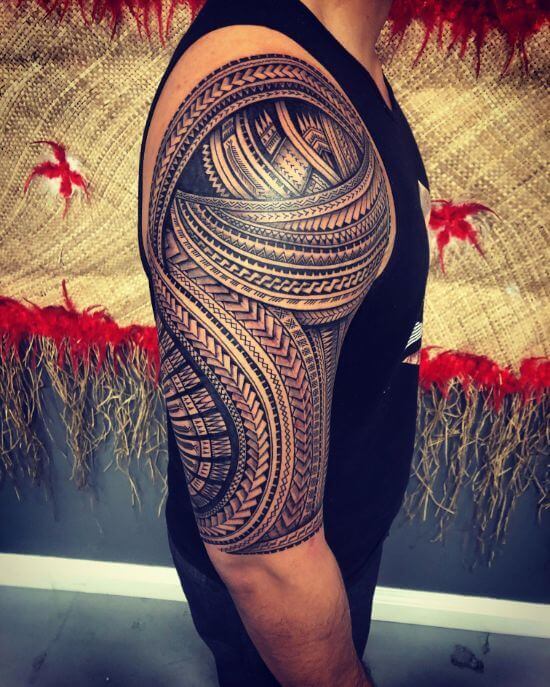 If you have toned biceps, then a Polynesian tribal tattoo design is apt for you.

The sun: The sun represents riches, rebirth, leadership and grandeur.

The ocean: Oceans represent the flow of life and the circle of death.

The turtle. They symbolize family and fertility, along with the eternity of life and harmony.

The lizard: The lizard symbolizes protection from evil and ill wishes. As they are considered survivors of great disasters.

The spearhead: The most used images by warriors in Polynesian tattoos. Spearheads are supposed to be associated with war, enemy, and victories.

The entata: Entata symbolizes people in the whole mix. They can mean anything from an individual to a group of people generally warriors or brothers.

The stingray: The stingray is another most popular element of Polynesian tattoos, it represents speed and agility along with the state of peace and grace.

If you are planning to get a unique tattoo design, then give Polynesian tribal tattoo designs a shot. You will never regret your decision! Polynesian tattoos look awesome! Undoubtedly, they make for great tattoo designs. However, you will need to make sure that you go to an experienced tattoo artist, who has done Polynesian artwork before.