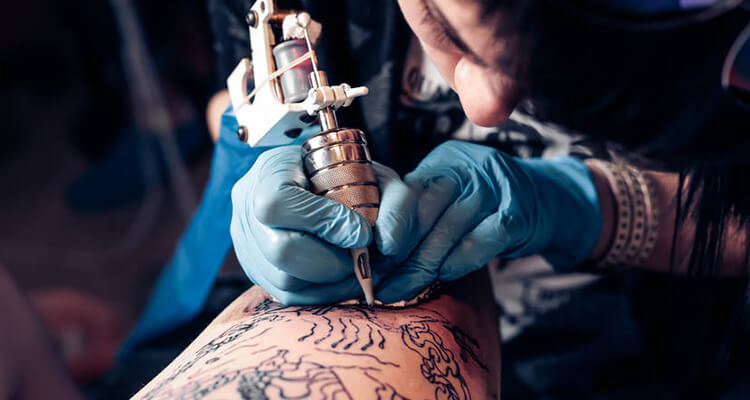 A tattoo machine is a hand-held device used to deliver the ink into the person’s skin. As the name suggests, these machines are typically used to create a tattoo, a permanent mark on the skin made with permanent ink. Modern tattoo guns use electro-magnetic coils that make the armature bar move up and down. A barred needle grouping connected to the armature bar pushes ink into the skin.

There are three types of tattoo machines or tattoo guns; namely,

Here is how these machines or tattoo guns work: 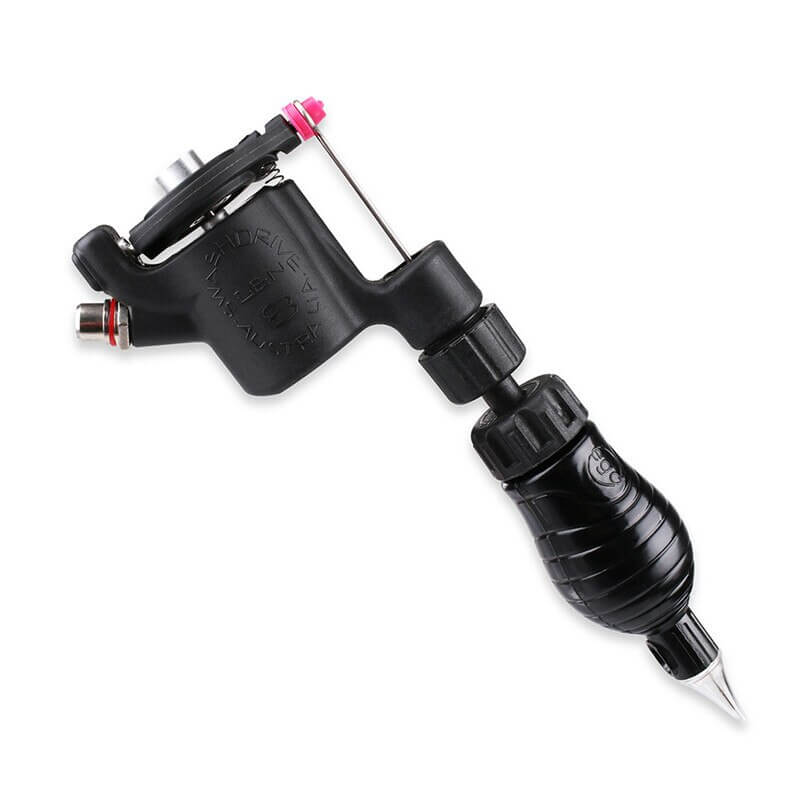 When it comes to the most popular tattoo gun, the rotary gun tops the list. The rotary tattoo gun is very light-weighted; it consists of very few components, has a simple design, and is very quiet. This motor-powered machine drives the needle’s vertical movement. The motor in this gun is small and moves the needle quickly up and down. It creates a cyclic, fluid, and even pattern with its needles. 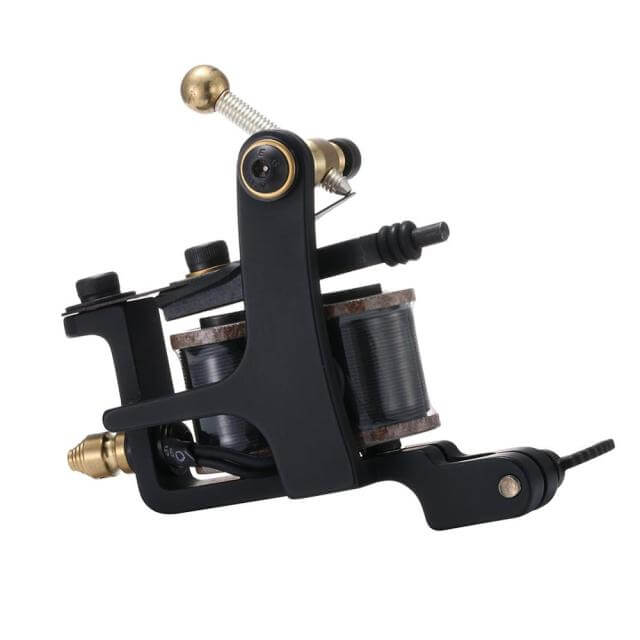 A magnetic coil machine is a traditional machine that uses an alternating electro-magnetic current to pass through coils and rapidly turns magnets on and off. This pulls a spring-loaded armature bar up and down, resulting in the armature bar tapping the needles into the skin. Coil guns are louder than rotary guns, which produce buzzing sounds that can easily be associated with tattoo parlors.

The needles of a coil gun are tapped into the skin like a hammer. The tattoo artist must exercise extreme caution when using this gun because it is more difficult to control than a rotary gun. To make it work, you must use very precise strokes and hand movements. Because of the ability to fine-tune things, it’s best used for shading, especially in grayish colors. 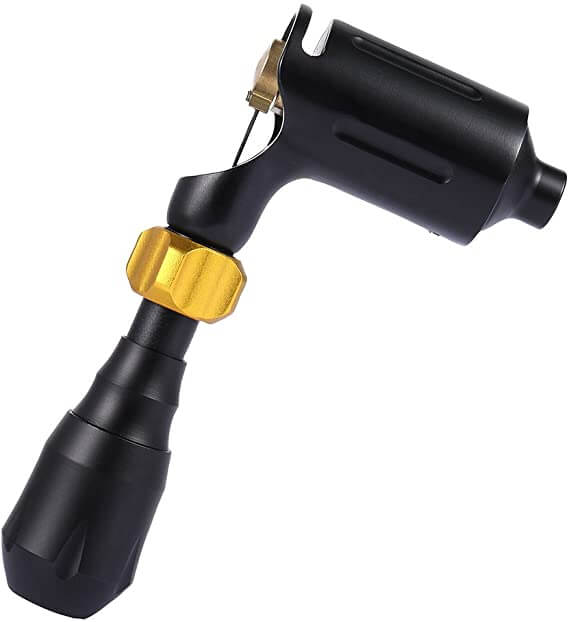 Invented in 2000 by Carson Hill, the pneumatic guns were revolutionary. This is due to the way it works: these machines operate by using compressed air from air compressors to make the needles move up and down. One of the most significant advantages of this type of machine is that it is lightweight and safe to use in an autoclave.

Pneumatic tattoo guns are the most advanced of all three, which makes the gun the most expensive. These guns provide unlimited benefits to tattoo artists, which makes this gun desirable.

Tattoo machines fall into two categories, namely, Liners and Shaders. Both the two are important for the tattooing process, depending on the type of tattoo being done. Here is how they work:

Liners produce short, fast strokes that allow tattoo artists to create solid lines with a single motion. Tattoo artists need to be cautious while using liners as stopping while drawing lines can break the line’s continuity and make the tattoo look messy.

These machines require quick strokes that vary greatly. There are standard and fine liners with a variety of needle configurations. Liner needles are grouped in various numbers in a round configuration and are frequently tightened at the taper such that the points are very close together. The finer the liner, the fewer needles it contains and the thinner the needles. A liner will use one to seven needles at the same time. These needles are arranged in a circle.

Shaders, as the name implies, are frequently used for shading. Shader tattoo machines have longer springs than liner machines. Their strokes are long to achieve delicate gradients and ink saturation. They’re also helpful for carving lines and filling in large blocks of color. Shaders have more needles than liners, making them stronger.

These machines are slow and precise, leaving no skin uninked. Shader needles can also be arranged in round patterns or fanned out to form Magnums or “Mags.” The biggest advantage of Shaders is – it is gentler on the skin, which is essential for covering large areas of skin.

The three components found in every tattoo machines are:

The tattoo needles are attached to an armature bar, which connects to the part of the machine that moves up and down. The armature bar passes through the “tube” with a hand grip attached, fitted into the machine’s vise to hold it in place.

The needle is encapsulated within a tube that is just long enough to allow the needle’s tip to protrude with each downward movement of the armature bar. This constant movement brings ink to the needle, injecting it into the person’s dermis (the layer of skin just below the surface).

A special wiring harness known as a “clip cord” or “RCA cord” connects the assembled machine to a power supply. The power supply has settings that allow the tattooer to control the speed of the machines, among other things, and is typically activated by a footswitch to keep the tattoo artist’s hands-free.

Some artists prefer to work with stainless steel tubes that must be cleaned and sterilized after each use. Others, on the other hand, prefer disposable plastic tubes for both safety and convenience.

Tattoo needles are the most critical component of a tattoo machine because they penetrate the skin to create beautiful tattoo designs. Needles are similar to miniature paint brushes, which come in a variety of shapes and sizes. Within each size of the needle, there are some variations available. Six basic types of tattoo needles are as follows:

Each type oif needle is discussed in greater detail below:

The pins on the round liner needles are fastened in a round pattern, thus the name. These needles are used to achieve crisp, clean lining tattoo work. The number of round liners used determines the thickness of the line (e.g., 01 very fine, 14 very thick) and the thickness/gauge of each pin.

These needles are commonly used for both bold and intricate dot work and lining work. In addition, these needles are used for Japanese, Geometric, Tribal, Samoan, Traditional, and Neo-Traditional tattoos. Once dipped in ink, lining needles will only allow a small amount of ink to be extracted and worked into the skin. The lining would be difficult if too much ink was spilled!

Round shader needles are almost identical to round liners, except that the pins are not as close together. That is, in addition to drawing thicker lines, they can also be used for color filling and basic shading. These needles are designed specifically for script and lettering. Furthermore, they are used for basic shading and color filling, Geometric, Samoan, Japanese, Geometric, Traditional, and Neo-Traditional.

Magnum shaders are the most commonly used grouping or needle type for almost all shading work. Magnums have a large capacity for holding and delivering ink, making them ideal for large areas of color packing and shading. Magnum needles come in a variety of shapes and sizes. They work best with black and grey tattoo designs. Aside from that, they are used for Japanese, Tribal, Samoan, Traditional and Neo-traditional, and color realism.

Curved magnum shaders, also known as soft magnums, soft edge magnums, and round magnums, are used in the same way as round magnums, except that the pins are arranged so that they arch at the center. That is, the needle’s edges run along the skin with greater conformity, resulting in greater ink dispersal and a more coherent line. Also, it is gentler on the skin and aids in soft shading. Tattoo artists use these needles for a variety of shading and color packing techniques. These needles are also suitable for traditional and neo-traditional tattoos.

The pins on double-stack magnums, also known as double stacks, are much closer together. These needles are used for an incredibly complex shading or colorwork where the artist wants it to act as a magnum with many pins but not as widely spaced.

Tattoo needles are labeled with codes such as 08, o9, and so on. If the code is 09, it means that a round grouping is made with 9 needle counts or 9 pins. The letters at the end of the code refer to the tattoo needles’ grouping.

Tattoo needles puncture the skin and directly inject ink into the dermis. Due to the human immune system: the body responds to a wound with white blood cells that try to permeate and remove intruders; however, ink pigment particles are simply too large to ingest, causing the tattoo ink to become permanent.